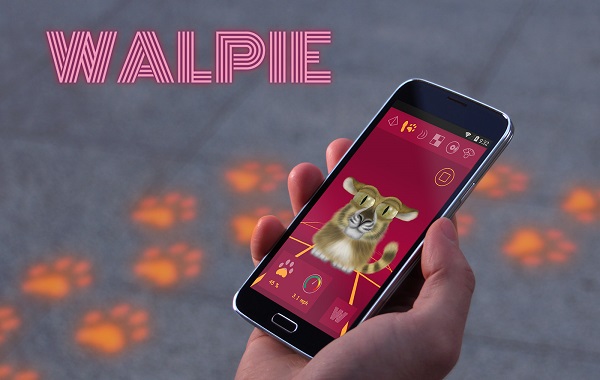 Yes, this is yet another Tamagotchi-like mobile product, but there are a few reasons why it is still worthy of your attention. If you look at the Kickstarter video with the mysterious Mr MITS in the main role you might feel a bit confused… But intrigued at the same time. The domain name is also pretty appropriate – walpie(dot)CAT. 🙂 Walpie is a cat, but not an ordinary cat – he is a walkopard (Panthera Walkus!). He is also a very groovy cat that lived on an LP during the seventies and today he is trying to move to mobile. Why? To make YOU move, get up from that couch and go for a walk. But only if Walpie feels like walking. And when you start walking, make sure that you’re not too fast or too slow… Or you’ll lose Walpie.

The team called Phi-line (pun probably intended) comes from Croatia. Tomislav Krpan and Edgar Njari met at the college – Tomislav is an Android developer and Edgar is a graphic designer and a photographer. Walpie is their first project. Tomislav had an idea of “walking with a being that lives in a mobile phone with a help of GPS”. Edgar sat down and drew that being – in a few minutes Walpie was looking at both of them from the other side of the screen.

Walpie is here for us, the couch potatoes, and if we want to take care of him we have to get up from our chairs/sofas/beds and take him for a walk. Walpie will determine our pace – if we move too fast, he will “drop out” of our smartphone. The phone will remember where we lost him and we will have to go back to that specific location in order to pick him up. Otherwise, the app will remain empty. The creators explain further:

Also, Walpie can go for a walk only if he has enough strength in his paws – Paw Power or Pawer – so he needs some rest to restore it. His fur has to be all shiny when he goes out, so he has to spend some time licking himself behind a curtain. There is also a tail test, which shows you Walpie’s mood for going out. His tail serves as a needle on a special meter that shows whether he wants to go out or stay in. After you earn a certain mileage with Walpie, he will decide to sing you a short song. His voice is a real attraction because he sounds like a Hammond organ, which was popular in popular music from the seventies. There are seven songs which you’ll be able to unlock this way.

Your goal is to raise the Walpiness level. But what is Walpiness in the first place? You will find out when you start using Walpie, Tomislav and Edgar tell us.

Our goal is to set up a system that tracks GPS locations of all Walpie users via the internet. If this goal is reached, an arrow might pop up on your screen telling you in which direction and at which distance you can find the nearest Walpie users. If the arrow leads you to a bus station with two dozen people standing waiting for a bus, show some guts and yell out: Which one of you carries Walpie in his pocket? When you find a fellow Walpie user, be sure to approach him, meet with him and together you can go for a walk. If you walk together, your Walpiness will grow much faster. The purpose of this feature is to bring people together and encourage them to engage in direct communication, face to face.

And the funky music? Walpie is not a musician, but the music is a projection of his nature. The tempo of Walpie song is 105 bpm – that also determines Walpie’s pace. The song is recorded specially for the app and the Kickstarter video. And the mysterious Mr MITS (Man In The Suit)? Well, he was Walpie’s caretaker for the last 36 years. He kept him safe and sound in the LP at his New York apartment. But the rest of the story is still kept secret.

Still, we managed to break the final mystery – why is Walpie a cat and not a dog, the more logical choice for the walk? The team explains:

Because the ‘’master’’ walks his dog, and not the other way around. Walpie has his own thing. His own rhythm of walking through life. It is up to the user to catch Walpie’s rhythm, his groove. It’s Walpie who is walking you, because you need the ‘’Walpie walk’’ in your life.

Help Walpie with his first steps

The team raised a bit under $1000 and the campaign will be over in 18 days. In the case they don’t raise the needed amount, Walpie will not stop walking, the team says:

His walk along the trail of freedom, devoid of all inhibitions, will never cease because no obstacle could ever stop him. Failure of the campaign isn’t Walpie’s failure, but rather the failure of all those who missed their chance to walk with Walpie. It would be certainly more difficult for us to present Walpie to the world, but we wouldn’t give up because, in the words of the enigmatic Mr. MITS: The world is in desperate need of Walpie.

If you need a pal for your walks, take a walk to Kickstarter and meet the whole gang – Walpie, Mr MITS, Tomislav, Edgar and enjoy their groove.