In short, Viktor: A Steampunk Adventure is a game in which you control boar Viktor. By solving riddles and hanging out with famous people while laughing at humorous lines you try to become the new ruler of the fictional version of Austria-Hungary in which all characters are animals. All this might sound quite weird (and it indeed is) but after watching the trailer for Viktor, much more will be clear to you.

We wrote about Viktor at the end of 2014. After the Kickstarter campaign, unfortunately, didn’t raise enough funds, Viktor saw the light of the day in March this year and has been since available on Steam. In order to find out as much as possible about the game and the people behind it, I decided to chat with these “three guys from the internet” and see what do they have to say today.

Viktor is a work of three, Zvonimir Barać, Aleksandar Gavrilović and Sven Nemet, who are more known as Spektar Studio. In addition to Viktor, they say, they do other stuff:

Alex: I’m the developer of this game, do I have a life besides it? I’m not sure.

Sven: I draw for cartoons, picture books, books, well everything in fact. I draw of course for myself too, I write, I don’t do yoga, I’m disgusted with most of the new music, I don’t collect napkins and I dream about my own island, just like everybody.

In addition to programming, drawing and cracking brilliant jokes about themselves, Alex says that they often download games from the internet and that’s pretty much it. This, of course, doesn’t in any way imply torrents and similar activities and you should be deeply ashamed of even thinking about it. 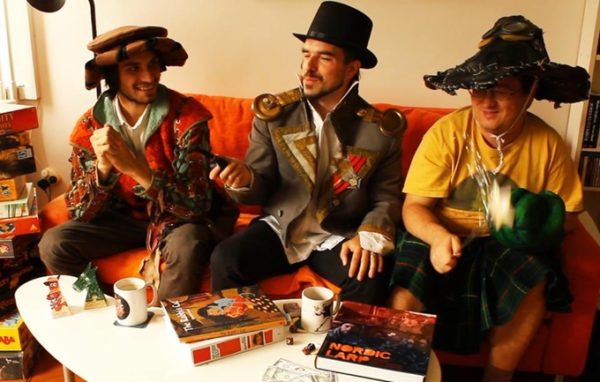 Let’s talk Viktor, the main character of the game. I was curious how his “parents” would describe him in just one sentence. Of course, when you ask a team that specialises in writing jokes for games, you get exactly what you asked for:

Alex: I hate the whole world, but I want to be an emperor so I’ll start loving it!

Apart from punk rock, at the beginning of the game Viktor works in public utility service, but quickly leaves and moves on to the journey of epic proportions to fulfill his life goal. At least that’s how I see it. Of course, as the game is set in a rather underrepresented period, I was wondering what was going on in creators’ heads when they decided for a steampunk game precisely in the time of the Monarchy.

Sven: The characters are animals because they’re more fun to draw. As for the setting, first, we wanted to create a game that would last thirty hours and in which Viktor would be conquering the whole world. Viktor’s world is different from ours – each country is “stuck” in its “most interesting” period, so Viktor would be conquering Napoleon’s France, ancient Rome, and Croatia would be a part of Austro-Hungarian Empire, of course. I would go back to Austria-Hungary! 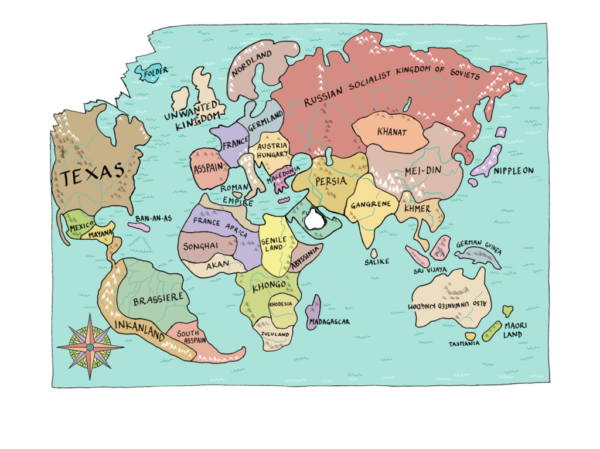 Let’s be honest, I don’t know that much about Austria-Hungary that I would like to go back. But as I listen to Sven referring romantically to this period, I’m thinking that it might not be bad at all. But it should be steampunk, it’s not possible otherwise. Creators thought it logical that Viktor’s adventures should begin precisely in Zagreb and Zvonimir explained to me how Austria-Hungary fits into the game.

When we decided to fragment the game in multiple episodes, it was logical that Viktor starts in Zagreb, or Agram in Austria-Hungary, which is in Sven’s world an industrial zone in the style of early twentieth century, only with more robots and mobile phones, rather than cockroaches.

Refreshment in the genre

Games with animals are intended for a wider audience than just gamers. Since Viktor is quite a different game than anything you could possibly try, I wondered how creators’ families reacted to the idea of a boar in a steampunk universe.

Zvonimir: A part of the family who knows about the game is constantly supporting me by periodically asking when we’re planning to make a fortune out of it.

Sven added that he is extremely popular at home after all had played the game, but Aleksander was for some reason kicked out of the will, although I’m sure that this was worth it.

Zvonimir: Sven said that he wants a game that is primarily a point and click adventure, and to me, it seemed a great idea because I had never written humorous texts in English, especially not in the format of branching dialogue tree so it seemed like a fun challenge. 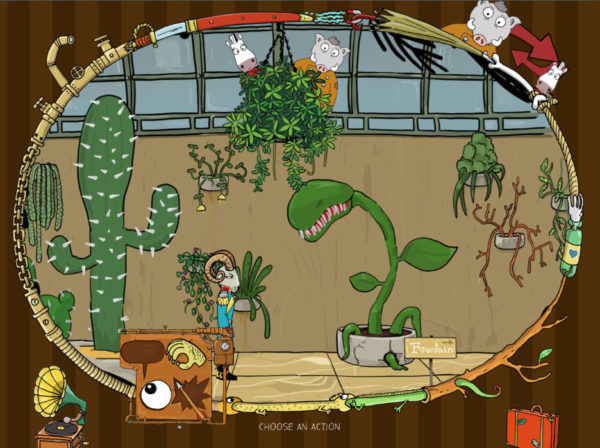 How to create a funny game

Viktor is much more than a simple point and click adventure because a huge part of the game’s charm is in the humour with which it is imbued. There’s everything, from jokes about the time in which the game is set to different European puns from that period, for which you have no idea why they’re funny. If you wonder what is a branching dialogue tree, bear in mind that each of your decisions is related directly to the reactions you get from the characters in the game.

However, it is not easy to hit the right dose of humour and that’s why I wanted to know how difficult it was to create a game that relies on humour so much:

Zvonimir: It was very easy. We all had a good time while writing the game, commenting each other’s ideas and rearranging conversations so that they are easy to navigate. Some things were a bit hard to translate into English and still remain funny but it seems to us that we were pretty successful. The only thing I fear is that the humour is much clearer to the European audience than the rest of the world.

The somewhat different answer was given by Sven who said that they had worked for three years to finish the game, so you can tell by yourself how easy or not this venture was. 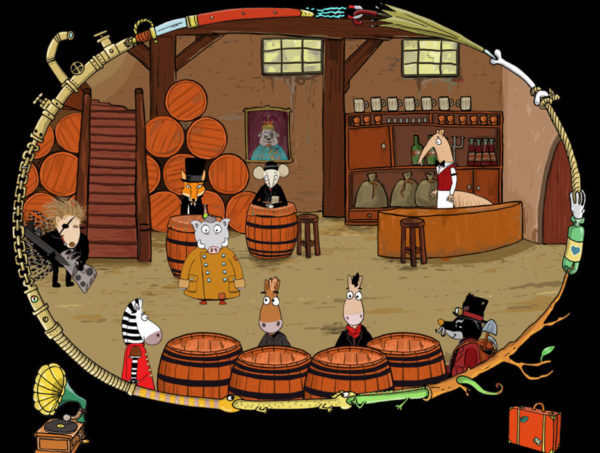 Of course, I’m not the only one impressed by Viktor. Last year Spektar Studio got the award for the most creative indie game at the Reboot InfoGamer. Since with indie game prizes, naturally, comes international fame, it was logical to ask this interesting trio how they cope with fame having the game on Steam and the award on the shelf.

The boys remained modest and stressed that they intend to get rich but they are worried that fame will spoil them. My advice was that they stay focused and don’t allow to be distracted, and millions will come by themselves. To find out something new about the people to whom I was talking, I asked them which historical figures they would choose to be, and their answers were extremely logical:

Alex: AM I NOT ALREADY A HISTORICAL FIGURE!?

Zvonimir: King Solomon, of course! If I can’t take this, than Marmaduke.

Sven: Batman! No, better Captain Sparrow or Maradona, actually. But it’s also nice to be Viktor.

Further, if you wanted to know who would win in a fight between Franz Kafka and Barack Obama, the opinions differ:

Zvonimir: Obama is a bit old, but Kafka has long since passed away, so probably Obama.

Sven: How can you say, Obama? If we consider that Kafka’s dead, then he would be a zombie, maybe a cockroach zombie. Kafka wins! 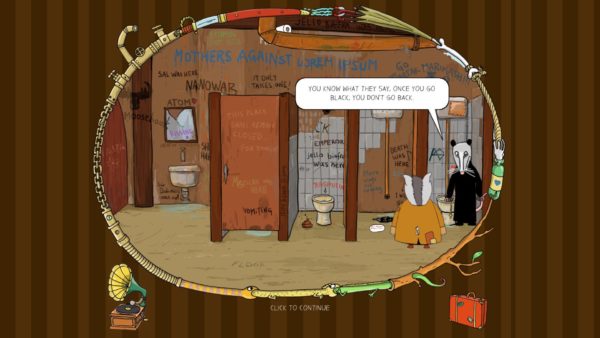 Viktor 2 or maybe something completely different

It seems that every day should teach us something new. But let’s get back to Viktor and his adventures. Following the successful release on Steam last month, Viktor got a lot of nice reviews and has a good position on the biggest PC gaming store. As for the possible new members of the team – they aren’t thinking about them, since, as Zvonimir says, for now, they are trying to keep themselves busy. Of course, there is a possibility for cooperation, in case someone doesn’t need money:

Sven: We work great in this way. For employing someone new we don’t have the money yet, but it should be added that someone can join if he/she works as we do and when money flows in, he/she will be rewarded with fame. There are not many such people, and he/she should also match the spirit of our team. Not only as far as the humour is concerned, but there are certain anomalies in us.

And the life after Viktor? Future plans of the three are different, ranging from the possible continuation of the Viktor series, in case the original Viktor is popular, to the creation of platformers, rogue-like simulators and similar titles. Actually, it is better that we don’t know what awaits us as this only means that we’ll be very pleasantly surprised by the next title of this Croatian studio.

Before concluding let me add a grain of wisdom that Zvonimir shared with me and, after you will be left amazed by this interview, Viktor is waiting for you on Steam!

The name Zvonimir has a very pleasant and peaceful sound in Croatian. To the English, this name probably sounds more like a Bulgarian collector of corpses. But did you know that some early animations in the code still have “victor” in their names?