Term Sheet Guide: Know Thy Terms Lest You Should Wreck Your Startup - Netokracija CEE
Jump to navigation Jump to main content

In the past five years, seed-stage investing has experienced a boom. In North America, seed funds now represent 67% of all VC funds, up from 33% in 2008. The CEE region is no different: according to European Private Equity and Venture Capital Association, the number of seed deals has increased 19x over the past four years. Even considering the fact that EVCA’s data is not fully comprehensive, since many investments are not announced at all or are not made by EVCA’s members, it still illustrates my point.

Hand-in-hand with the rise in seed funding naturally comes an increasing number of issued term sheets to all sorts of startups in the earliest stages. Most of these, especially in the CEE, are issued to first-time founders who might not have seen a term sheet before. Therefore it is not surprising to see so many entrepreneurs asking for help with or revision of a term sheet received by another investor.

This puts me in an awkward spot, since I don’t want to criticize someone else’s term sheet. So I decided to devote a couple of blog posts to this topic in order to create a term sheet guide that should help founders of seed-stage companies in Europe navigate through their term sheets.

What is a term sheet?

Before we dive into individual terms, it is important to understand what a term sheet is: a non-binding summary of key terms of the proposed transaction.There are typically just two binding provisions: exclusivity and confidentiality.

Confidentiality limits the amount of information an entrepreneur can share with anyone besides the investors who have proposed the term sheet. Basically, once you sign a term sheet, you should not discuss the terms with anyone who has not signed it. While this clause only becomes valid after the term sheet has been signed (just like exclusivity), it is important to treat the information sensitively even before a term sheet is signed. You will not make your potential investor too happy if you forward his term sheet to other investors to solicit a better offer.

Exclusivity prevents the entrepreneur from negotiating with other investors for some finite period of time. At Credo, this period ranges from 45 to 90 days after the term sheet is signed (the amount of time we expect it will take to close the transaction).The goal of the exclusivity provision, similarly to confidentiality,is to ensure that the entrepreneur doesn’t use the signed term sheet as a negotiation tool to attract more investors or better terms. If the transaction does not occur within the specified time frame, the entrepreneur can resume negotiations with other investors.

Why focusing too much on valuation can damage your startup

Let’s start the discussion with the provision that many entrepreneurs consider the most important: valuation. I have already devoted an entire post to valuations and investment sizes. This post is about structure, not numbers.

I agree that valuation is very important. At the same time, I would argue that many entrepreneurs (especially the first-timers) overemphasize its importance, which entails quite a few risks.

First, you might not get a deal done with the fund you prefer. Sticking with a fund that provides the best valuation can have short-term gains but can cost you in the long run. A fund that competes only on valuation is indirectly saying that such a fund can’t add much value. Choosing the right partnerwhom you trust can really boost your startup; even if it means a cut to today’s valuation, it can result in a much more valuable startup later on. I have seen too many startups get killed because they chose the wrong investor.

Second, a high seed valuation sets a high hurdle for subsequent rounds as well. Say you want to raise your seed round at EUR 3 MM valuation, and you expect that valuation to triple or quadruple by Series A to make it an attractive proposition for your investors. Do you know how many companies raised a Series A at EUR 10 MM valuations or higher in the CEE? A handful. Would you not prefer to raise your Series A at EUR 5 MM, if you were much more likely to raise such a round?

The numbers I’ve used are just for illustration, even though I do strongly believe that you are much more likely to raise cash in subsequent rounds (i.e. once you achieve your product/market fit) if you don’t push too hard on valuation in the earlier stages.

The third and the most important point I want to mention is the structure: the more you focus on valuation, the more incentivized the investor is to include other harsher terms in the term sheet in order to protect its downside. I have borrowed a very simple diagram from Jamie McGurk to illustrate the point. 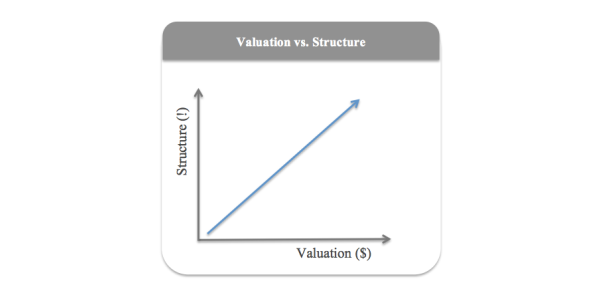 These termsand the resulting complicated structure can often be much more detrimental to your startup than a lower valuation. As a first time founder, you will have a very hard time going through a complex term sheet and identifying what impact these terms can have on your startup. And that’s precisely the point of my small term sheet guide: to explain to founders each of those terms and the implications they may have for their startup.

The next post will tackle the intricacies of a convertible loan, while the subsequent two will focus on all the terms you can find in anequity round term sheet.