At the Marketing Rockstars Festival in Graz, Samantha Yarwood, Marketing Director EMEA for Starbucks, talked about the Starbucks experience and how they keep on bringing it to life internationally by means of digital ventures.

Samantha said that as she was preparing for the conference, she started to think about what a rock star is. Apart from getting some cool gigs, being on stage and traveling the world, rock stars also have a unique opportunity to interact with people on a daily basis. As she said, when you’re interacting with people, you can make their lives better.

If you think about Starbucks and the logo that has done so well, the siren has been a rock star, too. She’s been around for 43 years, has traveled around the world, she’s present now in over 60 countries, she engages with people on a daily basis and builds a lot of engagement.

But it’s not just the siren, it’s also how she’s been able to keep her fame for the last 43 years. Today, Starbucks has over 18 000 stores internationally, in 62 countries, and 36 of them are in EMEA. It also has over 200 000 partners – people who work in Starbucks business. Samantha said that the reason they call them partners is because they partake in the success of the company and they are the most important tool for engaging with Starbucks customers.

We serve 70 million customers on a weekly basis. What’s really important is not just the connections, but the engagement we have. We’re relating in a way that is relevant to you, our customers. And we know that we’re successful at it, because we’ve been recognized over and over again, just like a rock star. For the last 11 years we’ve been on top of the charts. We are in the top 5 most admired brands internationally!

As Samantha said, it’s not just about the fact that Starbucks is recognized and admired, but what is more important is the trust they built with their customers. Also, it’s not just the customers, it’s the partners and shareholders that created all this, and that reservoir trust is a very unique experience.

From Pike Place to Starbucks

Samantha asked the audience to yell out a few words they think of when they think about Starbucks. You could hear words like lifestyle or a place to work. Samantha also said that somebody at the Marketing Rockstars told her that Starbucks is home to them.

Of course, everything  started with Pike Place. It was Starbucks’ first store. There were times when nobody thought that the brand would grow to where it is today, but it was built up through unique experiences. And if you go to Pike Place today, it is still the busiest Starbucks store in the world.

Last year, when I was in our Seattle office, there was quite a big buzz going on.  I asked what was going on and they told me there was a huge line up in front of the Pike Place. One part of the line-up was the quality of coffee, another part was just to have that experience in Pike Place, but more importantly, people wanted to understand and see how it was created and how we’ve been able to build a brand on that. 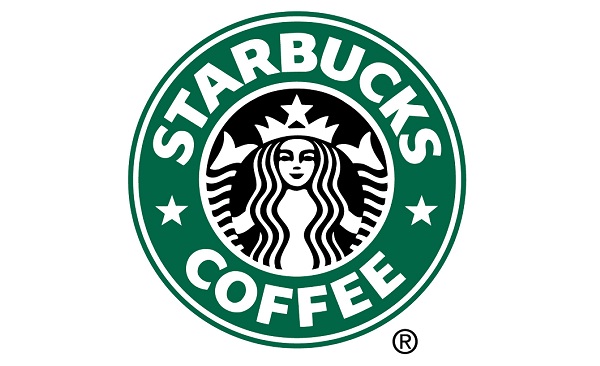 Unique experience for engaging with customers

Starbucks is not just a US brand – it is an international one:

We’ve been able to do that through other channels where we’re connecting with our customers. And when you look at the markets we’ve opened in, whether it’s India, Morocco, China, we are no longer just an American experience. We are a brand that’s brought to life through engaging with our customers in relevant ways, through listening to them and also responding to them. We’ve been able to transcend borders and we will be continuing to do so. And as part of that, we need to think about what’s relevant in markets we enter.

Samantha told a story of how she became a Starbucks fan. She’s a Canadian who started off in the Canadian business. She wasn’t a Starbucks fan and she supported the company called Second Cup, and a great place down the street called Cafe Latte. As one of her friends was a big Starbucks fan, Samantha had to accept the constant invitations for a coffee in Starbucks. When she walked in and looked up, she didn’t know what to order, so she ordered a vanilla latte like her friend.

By the end of my experience with Starbucks, I made friends with the barista behind the bar, his name was Nathan. He’s actually still in the company. But when I left that store, I felt like I had a new best friend. The barista is one of our most unique experiences and it continues to be that way.  But there’s been a change when you think about how consumers interact today. And although we didn’t build the brand on traditional marketing or advertising, because of all the new technology that’s come out, like social media, mobile, web etc., we needed to think about ways how we engage with our customers and how we do that in different fashion. Because it’s not only how we connect with them, but what’s relevant to our customers.

We could listen to what our customers liked, what our customers didn’t like, and the ideas that they had, but throughout those six years we’ve been able to do a lot more. We now have access to these digital assets: We’ve launched a free Wi-Fi in our stores, we’ve launched mobile payment as our 3rd mobile app, and of course, we are also present in the social media.

Back in 2009, when Starbucks first started to lean into social media, they had 1.5mil Facebook fans but weren’t quite sure about what to do with them. That’s why they thought of launching free offers, saying “Thank you for being our customers”.  They invited those customers to come to Starbucks stores and enjoy coffee, and the number of their Facebook fans grew up by 500 000 new fans in 2 days only.

Starbucks is one of the largest brands on Twitter as well. When you look at the size, Samantha said that again it’s not built on the number of followers, but it’s about the way Starbucks engages and how followers talk about the brand.

Literally, tens of thousands of people are talking Starbucks right now. People check in saying “I’m at Starbucks”, “Meet me at Starbucks”, they’re talking about having a Starbucks, many mentions of Starbucks. But again it’s not just about the number, it’s the content that’s relevant.

Samantha shared with the audience one of her favorite tweets ever. She showed true story of the most tweeted tweet ever. It shows only a smile, but Samantha sees it in two ways: It talks about the power of social media and it also talks about the engagement that Starbucks has.

6 years ago, when Starbucks launched My Starbucks Idea, they also had a website as their platform for talking to customers, who at that time grew to a number of 35 mil.

The reason I mention that is because if you think about the Wall Street Journal and New York Times combined together, they have 35 mil unique users. In assets, we’re a media company. That gives us the opportunity to engage and interact in a really meaningful way that even makes more important of what we say and what we do, because we brought that direct asset to build a communication. That kind of communication has to be relevant because when we get it right, we get it really right, but when we get it wrong, we learn from that.

How to create a good loyalty program 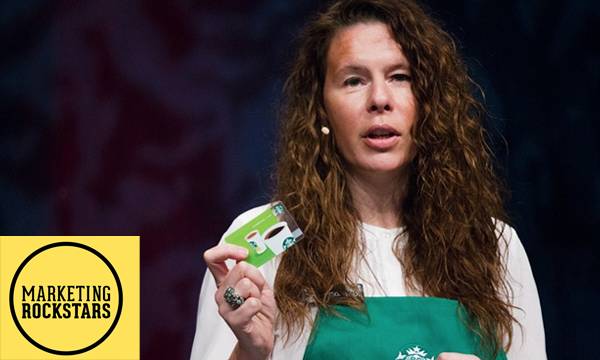 Samantha showed the Starbucks card for which she said that it’s not just a plain piece of plastic. Starbucks launched it as a gift card together with a mobile app attached to it. That’s how they created a loyalty program.

With that loyalty program we’ve been able to talk to our customers again. With this card attached to the mobile app, we’ve grown percentage of our business to approx. 30% our total revenue in US.

The reason for that success is the MSR, which is is known as My Starbucks Rewards. It’s the loyalty program that they launched in the US, but also internationally. Starbucks now has over 1.5 mil customers that they can connect with and who they reward for visiting Starbucks. It’s everything from free syrups, extra shots to special offers, and so on. There are approx. 80 000 new customers coming through MSR on a weekly basis.  Samantha said it’s a privilege of filling a rock stadium.

The coolest of the things we do is that we’re in the places where customers are. And whenever we’re thinking about any marketing initiatives we’re doing, we need to drive that through our mobile apps. I actually challenge my team to become the best mobile marketers they possibly can be. They need to be thinking about anything they do, how to be relevant to our customers, and how our customers can access information.

Being unique in all communication channels

What is even more important to Starbucks is how they connect and get customers’ insights.

It’s not just about taking the data that we have for our loyalty programs, and building a communication, it’s not about doing advertisement. It’s also how to relate to your customers and get insights so you can develop programs that are unique to them through any channels that you use: social, advertising, in store, and equally what’s as important as other things is getting to know our customers. So, with all the programs we’re doing we’re continuing to challenge ourselves around how to be involved.

And another example of that is Teavana. It’s a brand Starbucks purchased about a year ago and they launched a loyalty program tied to that brand as well. So, not only can their customer access from Starbucks, but they can do that through Teavana, too.  Also, Teavana customers have access to Starbucks.

In the US, and some other markets, we were able to create experiencing the brand for our customers. When they purchase it and wherever they are they can take that and have a barcode or a certain password to log online to get points and rewards. To have so many great assets is probably the most challenging thing for us.

But how does Starbucks take that and how do they make it relevant to every market? There are some things that are global, but as Samantha mentioned, there are so many unique challenges and ideas that come from other markets. Whether it’s the Middle East, Africa, UK, Starbucks always thinks about how to continue to be a leader and how to be that best online barista. Because it’s not only experiencing the store, it’s also insuring to be the best baristas no matter where they are.