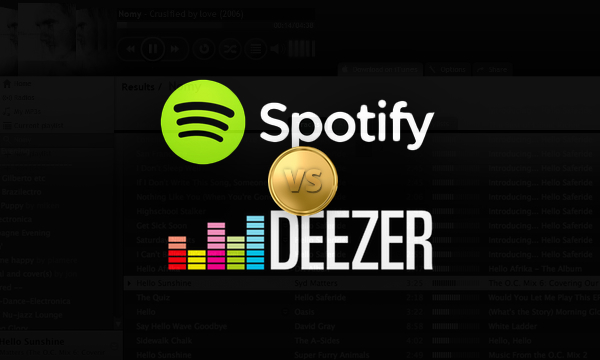 A couple of months ago we had a real battle in the Netokracija HQ in Zagreb – a battle between two popular music streaming services Deezer and Spotify. As Netocrats tend not to fight, but rather have an open argument, we decided to give a chance to our Executive Editor Mia and our reporter Marko to present their thoughts about these services to the audience. Feel free to express your opinion in the comments!

Mia: First of all, Deezer is legally available in this region and we might as well end the whole discussion right here. Also, there are partnerships with specific carriers (Hrvatski Telekom in Croatia and Telenor in Serbia, for example). Therefore, Deezer is available as a part of the mobile plan and users can pay it together with their monthly bill.

Marko: Although Spotify is currently not available in Balkan countries, one can use a proxy website to open an account. It takes just a few minutes and it’s really not a big hassle, all you need is a payment card. Although some local carriers have partnered with Deezer and offer subscription through the monthly bill, they haven’t taken into consideration family plans as Spotify did.

Mia: Premium+ package costs €6,99 per month. It includes unlimited streaming without commercials; Deezer is available for PC/Mac, mobile phones and tablets, without data transfer. Premium package costs €3,49 per month and includes only streaming on the computer. Free package offers two hours of streaming per month.

Marko: Spotify offers two plans – Premium one costs $9.99 or £9.99 depending on the country and allows users to listen music on their smartphones, tablets and desktop computers, with or without an Internet connection if the offline mode is turned on. There is also a free package that allows users to listen to all the songs with mandatory radio commercials.

Round Three: Number of songs available?

Mia: Deezer has 20 million songs – so they say. I didn’t count them, but I found almost every song I was looking for through their service. There is a good choice among regional music as well. At the same time, I hear that Spotify has a very limited amount of songs and artists from this area.

Marko: Spofity offers around 17 million songs, mostly foreign. Because the service is not localized, it may take some time for local albums to appear but in the most cases I was able to find the song / album even if they came from this region.

Round Four: What about the music we already purchased?

Marko: Because Spotify for desktop comes as a native app, users are able to import entire music collections without uploading any files to a server as is the case with Deezer. I’ve imported all the music I’ve previously purchased and nowadays I only use one app for playing music – Spotify. It can be also used as a substitute for iTunes – it will sync all the songs to your iPhone, iPad or iPod.

Mia: Ha, you can import your music collection into Deezer as well! Yes, you need to wait for some time to load it, but I rarely use this option, because I found everything I needed in Deezer itself. 😛

Mia: Deezer Premium+ package offers access to some of the new albums even before they are officially released. Also, there are prize games where you can win concert tickets or some other stuff. There are a bunch of apps inside the service, such as music quiz or wallpaper generators. I can’t say that I use them, but it is nice to know that they are there!

Marko: Since Spotify is very popular in the United States, most of their musicians release exclusive singles specifically for this service. Rarely do they publish entire albums before an official publication, but they are available as soon as it happens. As with Deezer, there are apps that are admittedly more focused on the user experience when listening to the album (information about the genre, band, charts, etc.). I installed a couple of them and although I do not use them as often, I enjoy the information and experience they provide.

Marko: By linking my Facebook account to Spotify I am able to discover the music my friends listen to. Also, I can follow their playlists and they automatically update as soon as new song is added. Discussions like “I’ll send you a YouTube link” are past. I stand by the fact that there is no better service than Spotify if you are going on a trip and everybody wants to play their playlist through a single device.

Mia: You can fully integrate Deezer with Facebook and connect with your friends in that way. You can follow artists and songs they like, find their music list. I would say that Deezer and Spotify are equal in this case.

Marko: I gave up on Deezer the moment I’ve noticed it does not have a native app. Also, Deezer is not available in the US App Store which poses certain problems for users in Serbia who use their iDevices with a US account (about 80 percent of them that is).

Mia: I use Chrome add-on and I haven’t noticed any drawbacks. And for the other thing, huh, well… 🙂

Marko: Let’s just say they are working on a US time. 🙂

Judging by the amount of marketing I’ve done for @Spotify in the Balkans, they should offer me a job or something.