An absolute star of the Marketing Rockstars Festival 2014 in Graz, the one who had the biggest audience and got the loudest applause was no other than Scott Morrison, a business accelerator and a former marketing and commercial director at Diesel UK. As we prepare to see him at this year’s Weekend Media Festival in Rovinj, Croatia, we bring you a full insight into his powerful performance that left no one in the audience indifferent.

Forget what you know about leadership

Scott Morrison started his “high voltage” presentation, spreading an amazing energy from the very start, by repeating twice the important line in order to make sure everybody heard him:

Everything you know about leadership will only make you an average leader!

As he says, a lot of those well-known things are generic and as irrelevant as a university degree. They’re predictable and lead only to safe decisions and safe leaders. Fundamentally, all it does is reinforce the status quo, and he was more than happy to share his own beliefs, things that come from his heart and the things he has experienced working with global brands.

The advantages of being different

Showing his old school photo, Scott mentioned it was difficult to attend a school as the only black child there, but he had to choose between seeing it as a good or a bad thing. He decided to see it as a good thing, taking advantage of being “different” and soon discovering how “different” is incredible!

I was able to do things and get things done that nobody else could do, because I was the different guy and I was expected to be different. That was great! What I also learned in school were those very traditional leadership tools. Everybody has those tick box leadership skills they learned in their schools.

As Scott says, those tick box skills are generic and they don’t make you stand out from the rest of the people.

Being different, I was told that I was disruptive. I thought being disruptive was bad. However, I seemed to find out that that when I really was disruptive, I managed to change things in a different way in school. I set up an Anti-bullying unit. I had parents thanking me for helping their sons. I set up a kind of a social network for our House teams which made everyone feel like they’re doing something great. And guess what? I won the school’s highest leadership award. Me, the disruptive guy! The different one!

Ever since that day, Scott says he’s been thinking about how the word “disruption” has bad connotations and how people think disruption is a bad thing. They think disruption is challenging and difficult to deal with, and they see it as a challenge to the status quo. In fact, Scott claims being disruptive is a great thing!

Scott has been able to work with organizations where disruption positive is a norm, it’s how those organizations operate. Saatchi&Saatchi’s way of living was “Nothing is impossible!”. Diesel’s “Only the brave” attracted the brave ones, those who are brave enough to be a part of disruption, Nike is all about “Let’s do it!” which means let’s disrupt the world positively.

I’ve been very grateful to have worked with some of the most incredible leaders in the world and helped shape disruptive positive messages.

Scott believes accelerated leaders accelerate businesses by creating disruption positive in their organizations. Creating disruption positive in the business helps you as an individual and as a leader be unique. It’s a very powerful position to be and it has a whole set of power that ultimately help you and the organization perform on a much higher level.

Scott mentioned one great example he found in the book. It’s a story of a Nascar driver who won Nascar championships 7 times. The reason he was so successful with it, even when they constantly changed race tracks, was the fact that he did things in a way others didn’t, he did things in a way that no one expected to be done. He was constantly reframing his ways of winning the race.

My question is, how do you constantly reframe? I’ve been working with a huge global record label recently, and we’ve been doing some reframing work. The first thing we did is ask ourselves heresy questions – those are the ones everyone knows about but no one ever asks them. So we asked ourselves: What happens if nobody wants to buy music anymore? What happens if Spotify launches record label tomorrow?

Scott says accelerated leaders make fantastic collaborations. They make things happen, they do not operate in silos. They are not concerned over leading a department, but they lead a community, and they lead a network. That is a powerful way of doing things and it gets things done much quicker.

Many average leaders don’t like conflicts because they equal confrontation and challenges, and average leaders don’t like that. But Scott says conflicts are healthy tensions, and accelerated leaders embrace them, which helps them create a powerful organization. He showed a Chinese symbol of the word conflict. In Chinese, conflict is described by two symbols: danger and opportunity.

Average leaders think that being always on means to have their Blackberries with them all the time. But Scott says that’s not the case.

My friend runs a fantastic agency in London. He always talks about this issue in a puppy dog logic. Puppy dogs, as you know, are very curious, they go around sniffing everything, and they love to absorb what’s going on around them. That’s exactly what accelerated leaders do. They find energy and positive solutions in everything around them.

The day after the conference, Scott and the Marketing Rockstars team arranged an interesting journey through the street of Graz. They talked to people about their problems and helped them resolve those problems right on the spot. Being curious all the time, investigating, searching and being everywhere is what will help you always be on.

Accelerated leaders thrive on chaos. They embrace the whole idea of chaos and they don’t worry about a business plan, but rather keeping busy with finding different ways of working, changing and building a network.

If you are not able to do that, you won’t be an accelerated leader, you will just continue doing the status quo.

Extreme empowerment of your team

Scott smoothly explained what he means by extreme empowerment.

You build a team around you to do exactly the things you need them to do.  Which means, you hire the right people, you give them the direction that they need and you get the hell out of their way. My team confessed they felt a bit scared after our first brief, they didn’t believe they could do it. But the magic in being an accelerated leader is creating a situation that will make your team believe they can do more than they thought they could. One of the guys in my team told me that, after I briefed them on the things to do, that she felt like Popeye after eating his spinach. 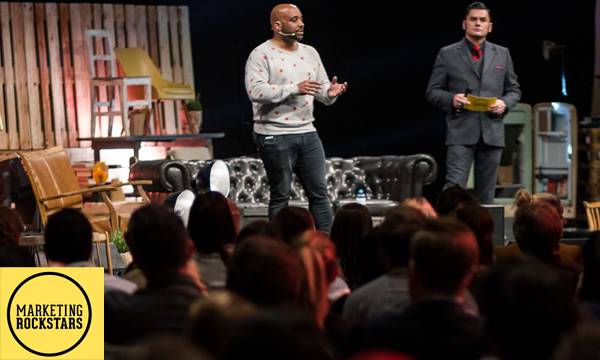 As Scott highlights, accelerated leaders create disruption positive to accelerate businesses. All these things create positive disruption that accelerates your business. In 2008, they had a standard model in Diesel which showed a customer journey that started at the parking space and continued inside of the shop, where at that time, there was a huge focus on everything inside the store as being important for success. It was a very traditional model that worked well when things were going well. But, in the new age, how would the brand manage when things start going wrong, when the sales go down?

We knew that model was no longer ‘fit for purpose’. This radical change we had to do required an accelerated leader’s mindset. What we did is: 1st we started to constantly reframe ourselves, we asked ourselves heresy questions, we built a network of radical collaboration across our market and across the department, brought people working together (they didn’t even know each other until then), moved away from status quo and shifted from the boring standard model to an accelerated model.  We changed do way we do business in the organization.

A customer journey is now a customer adventure

Accelerated leaders thrive on chaos and, when amplified with a problem, they work with another party and together they perform. That’s what Scott and his team did with Diesel. It was a big task, as Scott says, a 2-year long challenge. It had to be done on a puppy dog logic, otherwise they wouldn’t have done it.

Constant testing was necessary, too. We were testing technology, we were talking to our consumers for the first time, and we asked them what their experience with the brand was.  And then finally, the whole thing with empowering organization couldn’t have been done on our own. It had to be the whole business behind you. We had lots of different people empowered to do these incredible things. And they did it. And the biggest insight of the whole project was that we needed to stop talking about the customer journey, which was boring, and started talking about customer adventure. We created a new framework and we moved from the old status quo.

As he says, they finally started talking about data, too. They kept consumers engaged and in love with the brand and they had a completely new accelerating project!

During his highly passionate presentation, Scott Morrison enchanted the crowd with his outstandingly motivating performance and a list of powerful examples. He has this amazing skill of creating an accelerated whirlpool that oozes contagious energy, leaving everybody glued to their seat while inhaling, absorbing and storing everything they hear, feel and see in front of them.

He ended in the same, motivating tone, saying it loud and making sure his words are not to be forgotten:

Accelerated leaders create disruption positive to accelerate businesses! I’ve seen it, I’ve lived it, I believe in it!