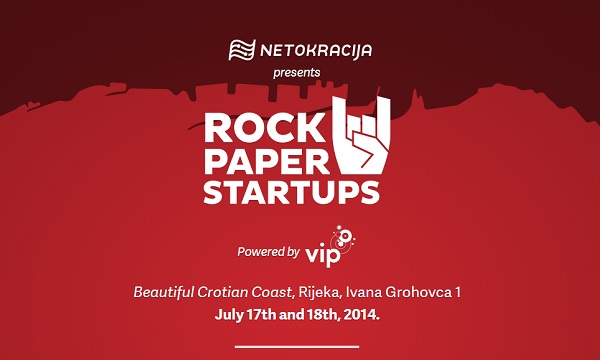 Ready for some summer startup conferencing? RockPaperStartups, the best summer startup conference in Eastern Europe, is back! Meet all the startupers, geeks, designers, developers and investors at this unique event that falls between something of a conference, a workshop and large meetup. Location: Rijeka, Adriatic coast, Croatia. Date: July 17th and 18th (+20th – WhoHack mini hackathon).

Last year, the founders of Teddy the Guardian, Josipa and Ana, made it into the best European startup accelerator Seedcamp at RockPaperStartups and have been making headlines ever since, including being named the most innovative new startup at this year’s CES by CNET! If you have a startup, it could also be the next big thing – why wouldn’t RockPaperStartups be a starting point? And did we mention that startups will get the chance to pitch in front of John Biggs, East Coast Editor at TechCrunch – and one of the startups will get a chance to present at Techcrunch Disrupt London!

Well, here are the four reasons you should come to RockPaperStartups this July:

1. Headliners You can Grab a Beer with

Other than John Biggs, Ana Burica and Josipa Majić we mentioned earlier, you will get a chance to get in touch with Corrado Tomassoni, Global Head of Startups at Paypal, Stan Schroeder, European Editor at Mashable, Max Gurvits, partner at Teres Capital, Nataša Đukanović, Marketing Manager at .Me, Dilyan Dimitrov, partner at Eleven, Bogdan Iordache, Managing Partner, How to Web – and many more to be announced!

Don’t be fooled. We’re not your mentor’s startup conference. RockPaperStartups will not only be awesome – it will be fun as the best rock concert you’ve been to! RockPaperStartups is made up of 3 unique parts: the Preaccelerator startup talks for startup novices, students and enthusiasts to learn how to start their startups; the Growth workshops for startups that will let existing teams get the knowledge necessary to break apart from the pack, and the partner WhoHack hackathon that will let you create a unique solution, test your team and win some prizes. Not too shabby, is it?

As we mentioned, in partnership with the world’s largest tech blog, Techcrunch, their very own East Coast editor John Biggs is coming to Rijeka to select one startup for the opportunity to come and present their product at Techcrunch Disrupt London later this year – the key startup conference where the startup will be able to meet investors, potential partners, users and get much needed insight in how to suceed in the future!

The plan is simple, as your eyes can see:

Did we mention the official RockPaperStartups party on the 18th? Well, now you know! 😉

So, grab your laptops, tablets, smartphones and bating suit and join us at the most awesome summer startup conference in this region – RockPaperStartups!