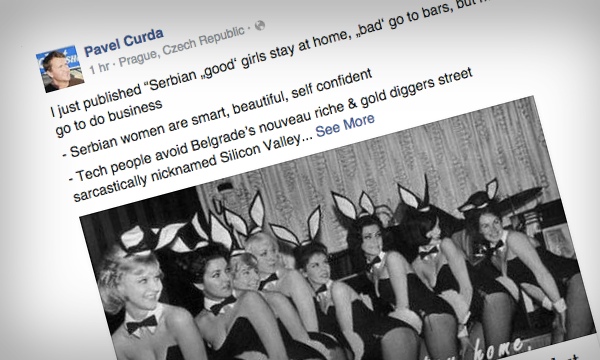 Pavel Curda, the Czech investor/mentor that was the middle of a scandal involving him pestering female entrepreneurs, has seemingly decided to help fight sexism in the Central and Eastern European startup space in a blog post on Medium. While this might sound like an article fitting for Valleywag, lets continue…

After attending Startup Live which was held in Novi Sad, Curda writes that he “learnt a big lesson and wants to be a better person” after sexting two “smart and attractive women” after a tech party in Berlin which Techcrunch’s Mike Butcher wrote about in two articles.

Change of Heart – or Personal PR?

On his Medium blog Curda writes about his plans to launch a number of projects to fight sexism:

He also told me „You have to say you will change. And that the industry should change“. I learned a big lesson, I want to be a better person. I also hope that my stupidity might help the others and I plan to lunch a couple of projects that will help fight sexism in the CEE region (they will be communicated via Twitter). I will also show some of the projects I will support and ideas to the new EC commissionaire Vera Jourova (Czech) who has gender issues on agenda.

In the same article Curda praises a number of Serbian entrepreneurs and community members, but also finds the time and characters to comment about “watching beautiful Serbian women” while linking to an interestingly chosen Facebook page.

Since I don’t consider myself fitting to truly comment on Curda’s change of view, I will leave the feedback up to the community on whether they find his words ring true. What is it true from the article is that “Serbian women can achieve a lot in business today” but is Curda the right ambassador for the message?