Investing In Startups – How Does It Work? - Netokracija CEE
Jump to navigation Jump to main content 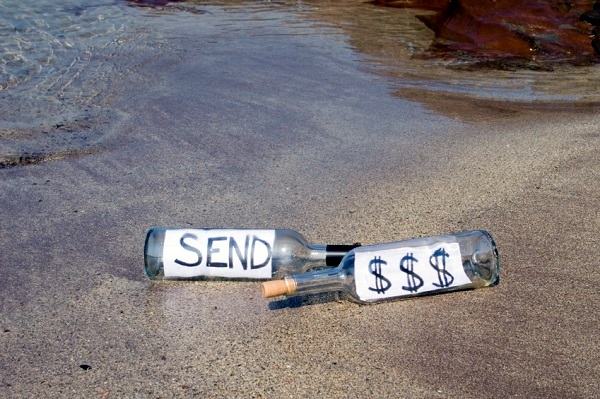 This is an introductory post to a mini series that analyzes the startup investment cycle: while this first post discusses what the cycle looks like in mature markets such as the Silicon Valley, the next post will analyze specifics of the cycle in the CEE region. Subsequent pieces will dig deeper into each phase and its CEE players, starting with Credo Ventures and the seed/venture investments.

Before we venture into the wild, a couple of disclaimers: the series (just like the rest of my posts) target high tech startups, not small and medium sized businesses. More on that distinction here. Further, I am part of the Prague-based, CEE-focused venture capital firm Credo Ventures and I am sure that makes me very biased towards our startup community. Love it or hate it.

The history and evolution of the investment cycle

A lot has changed in the startup investment cycle since the days of the firsthigh-tech VC investment that was made in 1957 (at least according to Ben Horowitz) – the Digital Equipment Corporation (DEC). Companies like DEC or Tandem had to manufacture their own products, which meant that product prototyping required for example building a factory. Considering that a startup also required a direct sales force, field engineers or professional services, it is hardly surprising that the payroll included 50-100 employees before having a first customer. Back in the day, establishing a startup meant spending massive amounts of money and undertaking huge risks before having any functional version of the product.

Luckily for all of us (maybe aside from factory builders), almost all modern startups today are able to divide this early stage investment cycle into different phases. Thanks to modern software and the power of outsourcing, startups can start prototyping on their product within minutes with almost no capital. It still takes a lot of money and massive risk to build a successful company (according to CrunchBase, the average successful startup with an exit since 2007 has raised USD 41 MM), but the cost of developing and testing the initial product has shrunk dramatically.

What are all these angels, seeds and venture capitalists good for?

Today’s investment cycle very much copies the company development cycle: first there are founders who come up with an idea. Then they turn the idea into a product prototype, to test whether there would be any interest in market. Building upon initial feedback from the first beta users, founders would fine-tune the product to come up with the first version to be released to the public. If the product gains significant interest, founders need to hire more people to help get the product to as many people as possible. As competition and alternative products emerge, the company finds itself under pressure to innovate again and thus it raises even more money to help the company drive innovation and buy out competition, and so certain phases of the cycle start repeating themselves.

Each phase in company’s lifecycle is associated with a different problem set that the company faces and different funding requirements. Furthermore, as the company advances in the cycle, its risk profile is decreasing. In mature financing markets, there are investment professionals who focus specifically on each development phase. In the CEE markets, we have a few VC/PE firms trying to address some of the stages, but we are far from having all bases covered well. 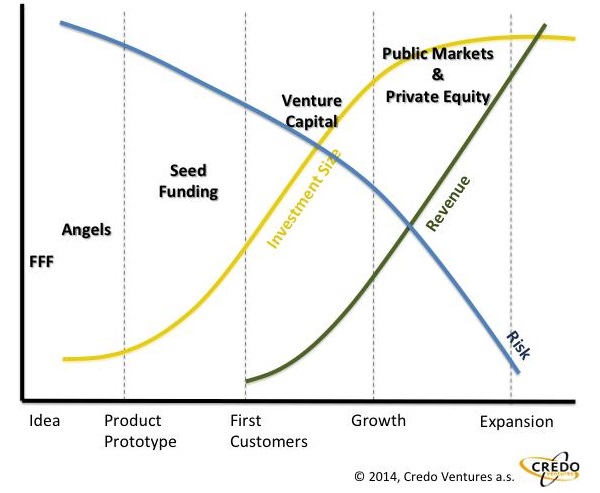 Please note that the graph above is just an approximation serving explanatory purposes, the lines between different financing stages are often blurry, and so is the investor focus (again, especially in the CEE region).

Angels & Family, Friends and Fools (FFF): these are the guys who take by far the biggest risks, since they invest solely into the entrepreneur with an idea. FFFs are a bit of a separate category, we fundraise from them every time we ask for pocket money and they don’t expect much in return (in most cases). Angels on the other hand tend to be investment professionals who generally invest their own money with the goal of allowing the entrepreneur to build the first versions of the product.  A good angel investor is a well-connected, wealthy individual who can offer operating expertise and his network of contacts. This investor class typically does not encumber the entrepreneur with any corporate governance typical for later stage investors such as a seat in the board of directors or lengthy due diligence processes.

Seed Funding: entrepreneurs operating in mature markets such as Silicon Valley or Israel have access to specialized seed funds, whose expertise typically focus on product development and sourcing of technical co-founders. While I don’t want to get into the intricacies of the CEE region just yet, since that is the goal of the next post, I will say that it is quite rare to see in our region a professional seed fund that can truly add value needed for this phase of the company life cycle. Seed funding is typically used to develop the product to a phase where it can be used by general public (or at least early adopters, who can swallow a few crashes and bugs here and there), and ideally securing a customer or two (customer, as opposed to a user, is someone who actually pays for the product).

Venture Capital: the typical venture capital investment, also called Series A or B depending on the stage of the firm, is used to scale company’s business model: having secured a couple of paying customers, the goal of the Series A investment is to build out the sales force and establish foreign offices to really get the product out on the market. A good VC fund should among other skills have the network to

(i) source the senior sales people and

A venture investment typically comes from larger institutional funds, so the entrepreneur must be prepared for a full fledged set of corporate governance rights: investors conduct lengthy due diligence, take a board seat and secure a host of rights such as liquidation preferences or tag along/drag along rights.

Private Equity & Public Markets: the company might be crushing it on an international scale, but it can still feel the need to expand more aggressively (often times via acquisitions of major competitors), or actively innovate on its product. It is also not uncommon that the original founders want to move on to something new and are seeking a way out. The private equity funds together with public markets fulfill all these roles: they can provide large amounts of liquidity or in some instances even acquire up to a 100% stake in the firm.

It is a very rare feat and a great accomplishment for a company to navigate through the entire startup lifecycle. It is even more rare to see the founding entrepreneurs staying for the whole journey. In fact, I can think of only a handful of entrepreneurs in the CEE region who can say they managed a company from the idea phase all the way to an IPO. Nevertheless, going through just the first few phases can be a thrilling and in some instances very rewarding journey.

The next post in the series is going to look at the investment lifecycle through the lens of the Central and Eastern European region: what are the specifics of our region, who are the players and what to expect when you approach them.