Infographic For Your Summer Holiday: Where To Drink The Cheapest Beer? - Netokracija CEE
Jump to navigation Jump to main content 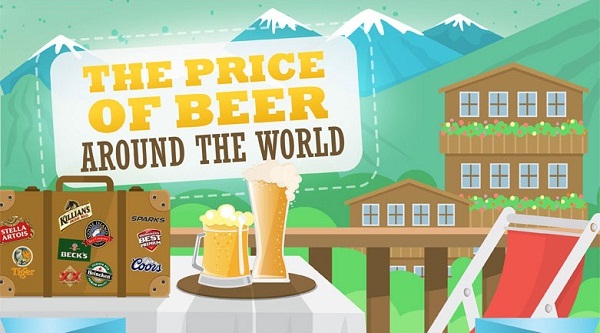 If drinking beer is a part of your travel agenda, we’ve got an interesting infographic for you! Forwarded to us by Alex Hillsberg, the infographic was designed for Financesonline.com by Ruby Media Corporation and it shows a clearer picture of where to and where not to enjoy a beer while traveling.

Guess where the cheapest beer is?

Unfortunately, we cannot make you happy about the country where you can get the cheapest beer, because it is less likely you’ll be traveling there this summer. Ukraine has the cheapest beer in the world, whose price is 0,59$ and whose beer hardly anyone will be drinking these days. Interestingly, Czech Republic is on the 5th place with the beer price of 0,71$. We can see our dear neighbours Serbia ranked at the 9th place with the price of 0,77$.

Drinking beer in and out of Europe

Drinking beer in the Middle East will cost you a fortune, because the countries with the most expensive beers are Iran (7,71$), Kuwait (7,09$) and United Arab Emirates (6,20). The only European country with a high beer price is Norway (4,61$). With that in mind, where could you find fellow beer drinkers? The answer is still Europe! Czech Republic is on the 1st place when it comes to number of beer bottles consumed per a person, followed by Germany, Estonia and Poland. You can see us Croatians on the 7th place, right behind our Irish friends.

The best selling beer brands in the world

No, it’s not Heineken, it’s not Bavaria, it’s not even Budweiser. The two best selling beer brands are both Chinese – Snow beer and Tsingtao. Heineken is in the 8th place.

If you have a thing for beers, book a nice vacation around Europe and take the best of the beer sightseeing! 🙂