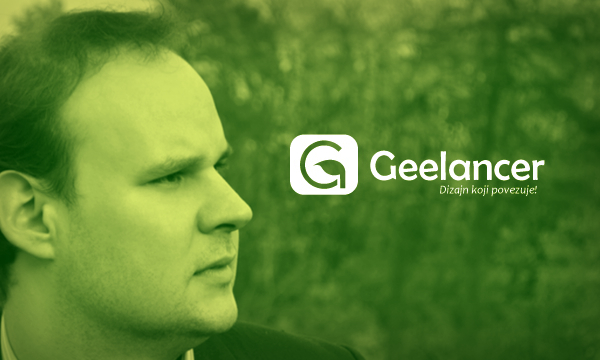 “Good design means good business” – said Thomas J. Watson, CEO and chairman of IBM at the beginning of the previous century. Led by the similar mantra, a group of young entrepreneurs has founded one of the cornerstones for both designers and those in need of design called Green Design. Netocratic was interested in this company’s story so we met with it’s founder, Darko Vidic, with whom we’ve talked about the company’s history, it’s current projects and future plans.

I have known Darko for a long time and what I keep noticing, apart from his obvious height and friendly smile, is a constant perseverance to solve different problems. It seems to me that persistence is the key ingredient which unfortunately, a lot of entrepreneurs are missing. Without it it’s almost impossible to start a business in Serbia, especially if it’s related to web.

Passion, perseverance and vision have all contributed to the establishment and management of Green Design. Thus today we present you the story of four founders who have departed on a long journey. Although the seas are calm, final destitution is still out of sight. So let us begin:

What was the initial spark for Green Design? How was it brought to life?

The story of Green Design has started in the August of 2009. I had an idea for a startup which would be beneficial for both domestic and regional market. I pitched the idea to a friend who was immediately in, and we were soon joined by my brother and another girl. We have begun to develop Green Design, which significantly pivoted from the initial idea. This wasn’t a bad thing though. You come up with an idea and you work on it gradually. We officially launched on June 1st 2010. with a new concept and we’ve been operational for more than three years now.

How difficult was it to acquire customers in the beginning?

It was difficult to reach out to customers. The market is such that small and medium-sized businesses often do not realize the true value of good design, and therefore do not invest in its development. Luckily, one of our first clients was Limundo, which was a big deal for us. Competition which was organized attracted nearly 900 designs, so the whole team spent days and nights making sure that things run as smooth as possible. After Limundo’s competition followed other small and medium-sized companies that now make up the largest percentage of customers who use Green Design.

What kind of relationship does Green Design have with it’s designers?

From the very beginning we have tried to create a platform where designers will be able to look for work and to demonstrate their skills to a large number of people. At this time around 6000 local and regional designers use Green Design as they respond to an average of 180 designs per each competition. Considering payments, we are trying to process them quickly and efficiently. However, Serbia faces huge problems with payments abroad so we are forced to use services such as MoneyBookers or PayPal. Designers are the ones who have our constant support. Many of them have shared their stories how in the past they could not get the money for their work, and that nowadays things are much more simpler and safer with Green Design.

How exactly do competitions work?

There are several types of competitions that can be organized. Certainly most desired, Classic + competition is published only after the client has payed the total amount of the award, and the commission charged by the Green Design. The money stays in our account and it is kept to the end of the competition, that is, until the client chooses the winner. This is a very important aspect of our business as designers can devote themselves to what they do best, knowing that they will be fully paid if they win the competition and that they will not have to claim the money from the client by themselves.

So, what is exactly a Guaranteed competition?

Guaranteed competition, which is also the most expensive service that Green Design offers basically means that there must be a winner. On the one hand, the client is assured that he is going to get a top notch design. On the other hand, designers prefer this type of competition because they know that there is going to be a winner in the end and that they will be paid out. However, this competition can only be accessed by Premium designers who pay an annual membership fee, which among other things includes a portfolio of their past work.

Do you still have administrative problems? How would you rate Serbia’s efforts in promoting entrepreneurship?

From the very beginning we have encountered major problems – first being paying out designers abroad. Led by the National Bank of Serbia, local banks do not support the terms of use on the website as a valid contract and therefore refuse to process the payment. Although we hired one of the best known law firms in Belgrade to set up our legal framework, we are still faced with the problems directly caused by outdated laws.

Would you agree that the IT industry in Serbia needs more lobbying?

Definitely. For startups, for those people who want to spark something in this country, the situation is very bad. Bureaucratic hurdles await at every turn, and it seems that the government is doing everything in its power to further complicate things for small and medium enterprises. There are already great young people in the National Assembly who advocate for rapid changes, but they simply do not have the support to make things better.

Does Green Design offer any other kind of services, are you co-operating with other companies?

Green Design offers a large number of services related to design. Competitions are divided into several categories, each of which carries a different prize. There is a category for logo design, marketing materials, web site design services, WordPress blog, banner design and print design. Each of these categories had a competition, but the most wanted service is the one where the customer is asking for a logo design. Although we have not yet worked with other companies that provide, let’s say printing services, we are definitely planning on it. It is in ours and our customers best interest that we provide all-in-one services.

Do you think that designers who use your platform should earn more?

Personally I think that the designer fees are still low. I would be very happy if they earned more money for their intellectual work, but unfortunately the financial situation of the country and the region is currently not allowing that. From the standpoint of the company, the prices are optimal, especially if we take into account the purchasing power in Serbia and the state of small and medium-sized businesses. We did set the minimal award, but for some time now we have witnessed a trend where companies set their competitions for much more that we’ve set as a minimum which tells us that the situation is actually not that bad.

Do you suggest prices to your clients?

Clients often ask us what price point they should set. We do not impose rates, but sometimes we can find ourselves in the advisory role. If its a larger company who is organizing a competition, we certainly encourage them to set a higher reward price because we believe that this will be manifested in the quality of design.

What are your plans for the future?

The next step is to fully implement online payment system that will support credit cards and therefore make it much easier for foreign customers to use our services. We hope that the online payments will further contribute to the development of our business. Also, we should be hiring new people pretty soon. Afterwards comes a rebranding process and we are opening our services to foreign markets with complete language optimization.

We are rebranding our company because the name Green Design in simple not adequate in Europe. It is too reminiscent of ecological design and we are not just that. We do not want to confuse people that we’re just about “green” design. We must have a clear marketing strategy and therefore we have decided to change our name to Geelancer. New name, for new millennium.

Persistence and perseverance are the main characteristics that describe Green Design and its employees. Despite a number of administrative problems, the company has paid it’s first million dinars to their designers last year, and their next goal is to reach the figure of 2 million by the end of this year. Through constant innovation and educating of its clients, Green Design was able to position itself as a reliable solution for both clients and for freelance designers.

In addition to EU expansion, Darko has announced the launch of other projects within the company, which should further refine the service and provide new features to customers. He says that team is ready for new challenges. Wishful thinking is over, it is time to live our dreams.