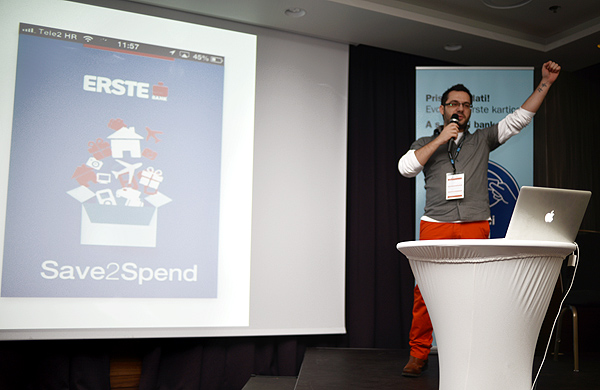 Three winners from Erste Finnovation Hackaton, which was held last week in Croatia’s capitol Zagreb, had an exclusive chance to present their winning projects to some 200 plus guests during the OMGcommerce event. Teams had an opportunity to choose from a several different themes but each of them focused on a different solution for mobile banking.

First of the winning teams, Hyperactive, took the stage to talk more about their 24-hour creation. Gasper Sopi, team leader told the audience that his team decided to make a simple, yet powerful financial organizer application – Save2Spend, one which would eventually spark an innovation in one’s financial tracking.

Also, the app can educate you on how Erste can help you with their credit rates. You can set your monthly budget, and monitor your spendings (groceries, shopping, gas). You set a budget for each category and see how much money you have left for that category.

Infinum team has decided on a different approach when they started their Erste Finnovation Hackaton project. Taking into consideration the size of the problem that the world is facing up to when it comes to money transfers, their project Easy Money sets to make sending money to your friend or a loved one much more easier and safer for an everyday use.

When Infinum team, consisted out of 4 members, came to hackaton, their idea was to solve this universal problem because most of the people don’t know the other person’s bank account number. What they do know is their cell phone number and that’s basically how the app works.

The idea was simple, send money over sms.

Although the idea was rather simple, it was actually pretty hard to make it all happen. Right from the start the team knew that it wouldn’t be simple, but it didn’t want to limit the app only to a certain number of banks, they wanted to make it universal. Easy Money is available on Android store and you can download it on the official website.

Team Cinematic concluded the pitching session with their mPay app which takes on e-commerce through implementation in different web stores. Their main goal was to make a safe and speedy solution, one which developers could easily implement into their e-stores, while the customers could shop through the app without the standard input of their personal information.