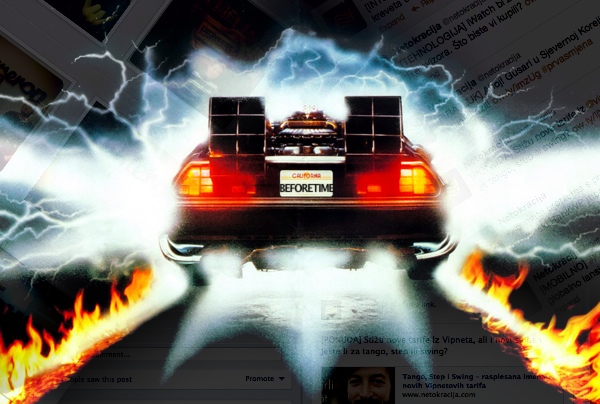 In Part 1 I claimed that today’s fixation with real-time communication has been corrupting the noble art of storytelling and selling your content short. We’ve forgotten it’s the “beforetime” foreplay that makes the climax special. I’m back to stretch the metaphor just a little bit more.

If you didn’t read Part 1, here it is. And if you arrived here via a Soonfeed alert, you’ll know that I’ll be here as well should you have any questions. Fire away in the comments below.

Making Beforetime Work for You

You might be a music blogger live streaming a gig, an activist live blogging photos from a demonstration, a business hosting a Google+ Hangout, or a geek live tweeting from a tech event. If you know you’ll be communicating something in real-time, then you can build a story around it beforetime.

Not all real-time moments can be foreseen. But once you start thinking about your sharing habits you’ll be amazed at how often and how early you can predict what, where and when you’ll be communicating in real-time. Of course you might not yet know the start time of your real-time moment, but that’s OK. The point is to kick off your story early by pushing intent into action now.

Every story needs a space to grow. Your real-time communication will be happening online somewhere, so that same web page can also be your beforetime page as long as the URL is active. If you’re live streaming a gig, it might be your channel or event page. For scheduled live tweets it can be the search feed of a unique hashtag. For a hangout, a Google+ Event page. And if you don’t have a landing page yet, simply add your future real-time happening to Soonfeed (where I’m founder and chief of happenings), so your audience can get an alert as it starts. As long as it’s shareable and can host a conversation, it can be a beforetime story page.

Building a compelling beforetime story around future real-time content isn’t a given. But if you’re passionate about your content, a story will emerge. Just keep in mind the 5Cs that most good stories have in common: context, challenge, crisis, climax and change.

In Part 1 I introduced a music blogger who live streams from his iPhone the first song of every gig he attends, and who’s bought a ticket on Monday to a gig happening Friday. Our hero has 5 days to build a story around his climax, a live stream of the band’s first song. Let’s say the band is touring to promote a new album and this is their third trip to the city (there’s your context). The ticket was expensive and our hero had been planning to go on a date Friday night (a challenge). He nevertheless bought the tickets with his rent money and then cancelled his hot date (conflict!).

Throughout the week our hero has been telling his story on a beforetime page (his blog) and across the social networks. His audience has responded with opinions on the band’s new album, complaints about the high cost of concert tickets and requests that he share a photo of that hot date he ditched. Friday’s real-time stream has become important to us. We don’t want to miss the climax to his story.

If you’re planning to communicate in real-time and want to start the beforetime early, simply divide your content into two (or more) parts so that Part 1 establishes enough context to generate interest in your final part climax. If you’re reading Part 2 of my article, for instance, chances are it was because you come across Part 1 first. You might have seen it on Netocratic, Soonfeed or one of the social networks and thought it would be worth checking out the climax. So even if you didn’t realise it until now, dear reader, you were part of the foreplay beforetime that made this climax that little bit special.