Due to its distinctive name, this year’s WebCamp “Talk” talk really got my attention. Firstly, quotation marks draw one’s attention while reviewing two tracks at the same time. Secondly, I found repetitiveness of the word talk very charming. This kind of talks during IT conferences are either a complete disaster or a hit. In this case it was a hit mostly because the real value of the talk lies in the experience of the speaker – the developer who is talking about how to speak.

Because Christian has been a member of the audience, he also asked himself how speakers had the guys to go on stage – which resonated with the audience at Webcamp Zagreb.

The main point was that, no matter if you’re an introvert or extrovert, open or shy, everyone can talk on stage – and everyone should be a speaker. There are three key points of Christian’s talk:

1. What happens on stage, stays on stage

The first message pointed out by our speaker is that mistakes and omissions are acceptable. The world’s become fast and information even faster.

Because the world has become fast and information even faster, what worked yesterday doesn’t work today. It’s the same with your talk – it’s happening now and it should be your main focus – now!

What happens later doesn’t really depend on you – it depends on the environment. Christian said he’s comforted by the fact that he’ll be dead in 50 years from now and his potentially bad talk won’t mean a thing. Oh, those realistic Germans. 🙂

Most people can’t handle the adrenaline rush and can’t relax completely. Yes, you will experience stage fright and, yes, you might not have an answer to every question. But it’s worth trying because it helps you grow and improve your communication skills.

2. Find value for yourself and your audience

?? While preparing to speak publicly, right at the very first stage, you are adding a value to yourself.

You may think of something you had forgotten, as well as learn new things and gather new information at this stage.

While talking, you are sharing knowledge and experience with your audience, and directly adding value to them as a speaker.

In order to find the right value for yourself and listeners, you need to know yourself and audience very well. The key of quality knowledge transfer is to find out what is your peculiar expertise for a specific audience. You don’t need to be the top expert in a field you’re talking about, you just need to be the right girl/guy for your audience. 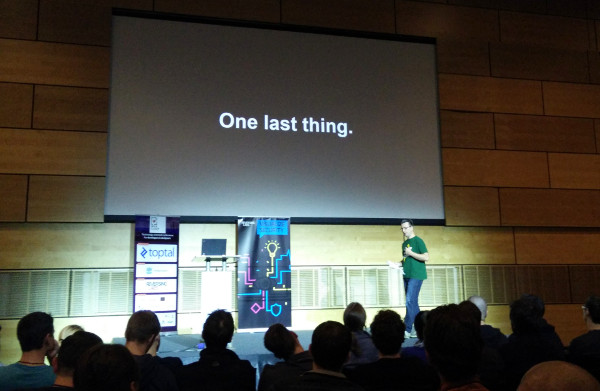 Through lectures and talks, you position yourself as an expert in a certain field. Other than the fact that it sounds cool and tempting, there are other rewards. First of all, you get to know new people – other speakers, audience, and organizers. Every contact is potentially a new business lead, and it could be useful in the future. Through networking you build your reputation and differentiate from competition with similar knowledge. But hey, your competition doesn’t do talks and they’re not interested in speaking publicly. They just sit in their offices.

On the other hand, socializing  contributes to your personal growth that will make you a better developer and a better speaker – hopefully. 🙂

At the end, I’d like to say that I had a sense of fear and exertion at my first talk, but it kind of disappeared in only a few minutes. Each of the following talks felt a lot easier and entertaining. I suggest you try to come up with something you like and others will want to hear from you. Afterwards you should find your audience, and trust me there’s an audience for everything. Lectures and talks will open up the door you haven’t been aware of, and bring mostly positive experiences. And the negative ones? Who cares, we’re going to die in fifty years anyway. 🙂

Boris Rauš is the co-founder of the web development and marketing agency BambooLab. Besides sailing the entrepreneurial waters, he enjoys traveling around the world. Boris is also an IAESTE international coach for creative thinking, motivation and association management. He enjoys experimenting with cooking and eating, collects comic books and holds his collection in a secret location.