airt’s co-founders, Hajdi Ćenan and Davor Runje, revealed to us this summer news on their new algorithm for learning and predicting customer behavior from structured data. After more than 6 months of preparation, they applied for a patent for its global protection in July.

They used the pitch session of the Infobip Startup Tribe members that was held at the conference in Zadar to announce that they will enable developers to use their system via API (application programming interface). For those of you who might not be fully familiar with the topic, API is a set of definitions and protocols that companies use to integrate various solutions into their own systems – in that way, developers can use powerful products and solutions without a need to research and know much about them.

Davor explains what that boils down to:

We’ve invested almost three years into deep understanding and solving the problem of predicting end customers’ behavior through the event-based data and we innovated deep learning techniques that can ‘extract’ the most value for making business decisions and results out of that data.

Now, we want to make it possible for others to get that value, but in a way that is most accessible to the largest number of companies. That means that we need to ensure our platform can be used by not just data scientists. And who better for that than those that already know both the technology and the domain of the companies they’re in – developers.

Opening towards the wider developers’ community

airt wants to set an example of how artificial intelligence is not just for data scientists that are already very hard to find, particularly data scientists with a domain/industry knowledge that is needed for successful implementation of AI in various fields.

Furthermore, if we take into consideration that only one third of AI projects actually make it, it is clear to us why individual companies have just a few opportunities to implement artificial intelligence into their businesses. Unfortunately, because of that, many of them are becoming less and less competitive in the market. Hajdi explains:

Modern businesses are complex, and we are working in a world that is constantly changing. Artificial intelligence is no longer something that is ‘nice to have’ – using AI enables much better understanding of the business and customers and enables making faster, better, and more accurate decisions. Companies that have already implemented AI have a huge comparative and competitive advantage.

Sadly, as Hajdi adds, almost half of AI projects never make it out of pilot and into production stage, and even then, another third fails due to lack of production-ready data, integrated development environments, and necessary expertise. airt’s move is an excellent opportunity to widen the use of AI solution to a larger group of experts in various industries and companies.

“Artificial intelligence is a technology that will mark next few decades and it is imperative it is accessible for implementation to as many companies as possible, so talking to developers is definitely a way to go”, commented Ivan Burazin, founder of the Shift conference and Infobip’s board member, thrilled that they decided to make this announcement on Shift itself.

“Let us do the hard work in the background” 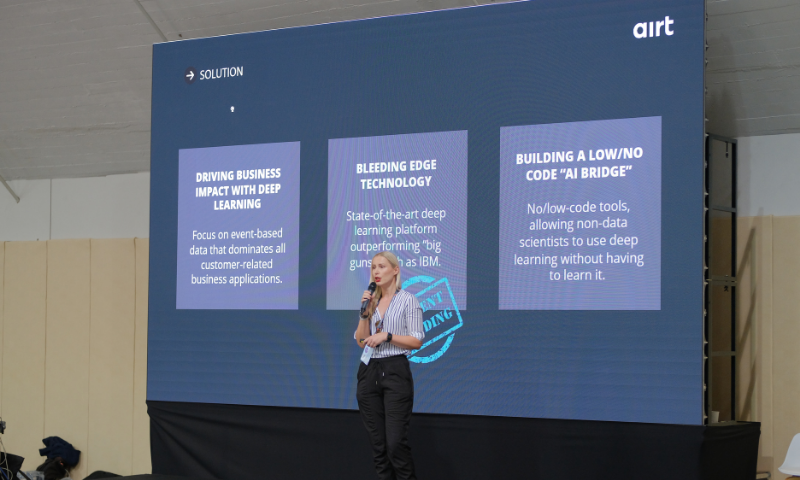 With this move, airt primarily wants to give developers the ‘tools’ to implement and start using deep learning techniques in their own companies, without having to consult anyone or learn new skills.

We know as a fact way too few companies have good data scientists, Hajdi comments. That means that those companies don’t learn from their own data because the entire process is either too expensive or they don’t have experts for it.

Implementation of artificial intelligence is a hard, complex, and expensive sport if you’re trying to do everything internally. But it really doesn’t have to be. Let us handle the hard work behind the scenes, so you can advance your business and quickly leap into the future.

Hajdi is enthusiastic for a reason, as this approach of opening APIs towards developers raises awareness of what airt’s system can do – it opens opportunities for new partnerships, encourages innovation, and increases system’s efficiency through collaboration.

They already have a number of interested companies waiting to sign up to use their API, she adds.

Hajdi, Davor, and their team are not doing this blindly; they’ve gone through the process of tech integration of their platform through APIs with a large SaaS provider, where they communicated with developers only. That was an eye-opening moment for them that nudged them towards the developer community.

The process of connecting and using the platform is rather straightforward. You need to authenticate your developers account and use API to connect your data source. After that, you decide what it is that you want to predict, for example, which users are most likely to churn, and run training.

The platform adapts to your data and its size, then it chooses the best training model to get the best results out of it. The last step is running the prediction itself and connecting it back to the data source, so that you can immediately act on that prediction by, for example, sending a message or a special offer to those customers so they wouldn’t churn.

Their platform is now available as a service in a private beta, which means that all developers that want to test it for their companies can join the waiting list.

She had early starts in PR but quickly went back to journalism covering IT industry, so no wonder she is at Netokracija now. As IT journalist, gamer and geek with video content skillset, aside of writing articles, she also adopted a role of Netokracija's video editor. Today, she mainly works as deputy editor-in-chief.