This autumn in Zagreb, Novathon #withPBZ will attract teams creating apps for the banking industry, with the teams potentially winning a €10,000 prize for the first place. 24 hours of coding and building the app can be a great start for a developer’s career, but also for every other member of the team, limited to 5 members per team, coming from the entire region.

In order to unleash energy and ambition of the participants of Novathon #withPBZ, a team of mentors will work with the teams, as well as motivational speakers like Matteo Rizzi, Nenad Bakić, Maurice Lisi and Chris Skinner. It was precisely with Chris that we discussed financial technology, hackathons and novathons, but also his views about the future of this dynamic sector.

The fintech sector is now mostly interested in AI

Speaking of the Novathon, Chris said that this was an important event because it shows how the banking sector understands the importance of digital technologies. Also, this kind of event is a great opportunity to break the status quo, regularly present in more traditional, closed systems. We have to agree that every competition of this sort is really a good shot at finding a revolutionary solution because you never know what gifted individuals could come up with, even if only in 24 hours.

However, regarding the current state of the fintech sector, the most exciting part of it has to do with the development of artificial intelligence and machine learning, this being a testament to how interesting these technologies are in almost any sphere of society. However, not everything is so promising, Chris says, talking about the present challenges of fintech:

Financing is decreasing in mature markets such as Europe and the US, accompanied by the uncertainty on the direction of the market due to Brexit and Donald Trump’s decisions. Until these clouds clear up and we get a sharper view of the future, fintech companies will have to buckle down and do what they do best, and that is writing code. Being focused is the most important thing.

But not to give false hope to anyone expecting success just because they have an interesting fintech idea, he states:

Every fintech start-up expecting financing just because it is cool will crash within the next 18 months.

You can’t keep good ideas to yourself

However, the current state of affairs in this sector doesn’t in the least affect the development of new companies that have the ability to actually change something, or competitions such as Novathon #withPBZ. Chris certainly supports the development of new fintech start-ups and says that everybody with a good idea should try their hand at it.

If you have a good idea, start right away. Do not let something stand in your way, but make your wish a reality. If your idea includes something regulated at this moment, find a banker colleague to advise you and mentor you. Never underestimate the complexity of banks, their resistance to change and regulations and hurdles that exist for a very good reason. Just try to solve them as soon as possible with your banking buddy – that can be me!

It’s pretty clear that Chris is going to make a lot of friends needing his impressive financial knowledge in order to systematise their start-ups or modify their apps, but if you only want to know more about open banking, you can hear about it in his talk.

Everybody is talking about open banking, but nobody defines it well. I think I know how to do it and that’s the reason why I’ll focus on it in my talk.

According to Chris, we will soon see the acquisition of one of the global banks by a tech company so as to reach their clients. Interesting, but only one of the trends that await. That’s precisely why he advises the participants of Novathon #withPBZ to turn to today’s hot stuff:

Artificial intelligence, machine learning and data analytics are currently hot, as well as open banking and open API. I would personally go for things that can be built with all the bank’s data available through the API.

Going back to hackathons, we asked Chris about his opinion on the difference between fintech hackathons and every other hackathon, to which he simply stated:

First, you need to understand people

Finally, seeing that the participating teams for Novathon #withPBZ can consist of up to five people, we wanted to know what the ideal composition of a team would be for this type of competition:

Ideally, you would have a good balance of gender, race and ethnic diversity, with wide-ranging age and experience. That way you get a holistic perspective, and since 99% of a good idea comes from the anthropological perspective combined with digital development, it’s very important to understand us as human beings. 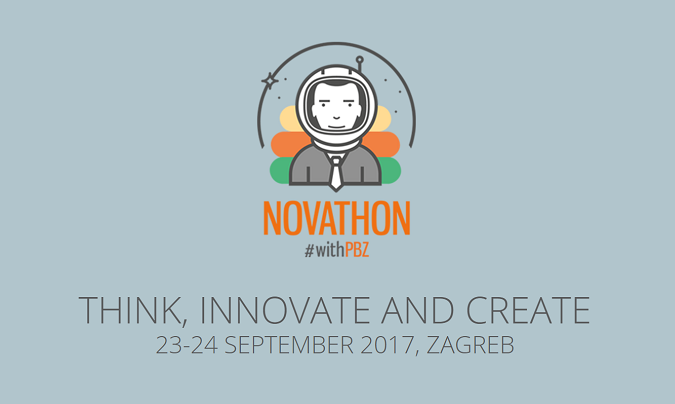 Since the organizers of Novathon #withPBZ understand us humans, they decided to increase the number of free spots for teams from the entire region and so everyone not yet applied is invited to do so because it could just be them that turn the banking industry around – and potentially to collaborate with our interesting guest!

As a reminder, Novathon #withPBZ will take place on 23 and 24 September in Lauba in Zagreb, and you can apply on the event pages until 8 September. Good luck!