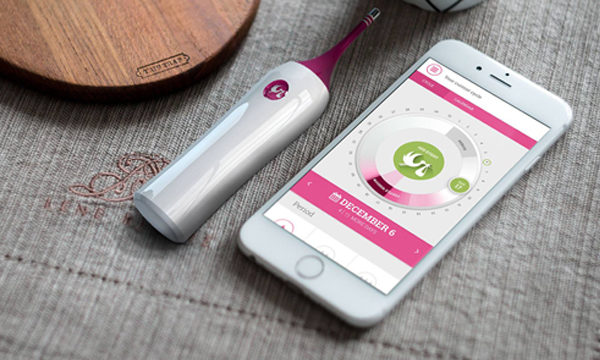 One in eight modern couples faces infertility problems, whereas from the remaining seven three couples become mentally tired after six months of unsuccessful attempts, thus only further diminishing the chances to conceive. This is why Baby-Stork was born, fathered by Slovenians Erik Zupančič and Andrej Brelih, the company founders, who recently recieved an investement from the StartLabs Ventures fund.

Measuring BBT and electrolytes in saliva

Baby-Stork is different from similar apps for tracking woman’s cycle and pregnancy planning because it measures basal body temperature (BBT) and saliva conductivity of a user. By using this data it can accurately determine the fertile days  of a woman. Both measurements are obtained orally every day by the help of a Baby-Stork Buddy (dimensions: 13.5 x 3.5 x 2.6 cm), which has to be connected and synchronized with the mobile app via Bluetooth at least once a month.

Both parameters have been recognized by doctors for a long time, but it was time-consuming and not easy to measure them. By the help of modern technology we have enabled faster and more reliable measurements. Above all, the whole procedure is far less complicated than the usual one and due to the Internet of Things (IoT) technology, the result is obtained immediately.”

Even though the application can be used independently, it is advisable to pair it with Baby-Stork Buddy in order to get precise key measurements. The creators told us that later, in the premium version, the data will be monitored by a chosen gynecologist who will advise the user on how to conceive as quickly as possible.

Baby-Stork is currently in a testing period, but you can already pre-order your Baby-Stork Buddy. However, if you “accidentally” get pregnant before its delivery, you do not need to worry – your money is going to be sent back together with congratulations from the Baby-Stork team. Interestingly, the first test group for Baby Stork had to be disbanded because 70 % of women got pregnant before the end of the testing phase. It may very well be true that psychology and mood play an important role here.

Interpreter and translator who can't understand, why is it that in 21st century some dictionaries are still being published in printed form only. She lives the experience of a self-employed freelancer and aims to promote entrepreneurial spirit and creativity in society, particularly with regard to the online environment and the development of modern technologies that are offering a plethora of opportunities.