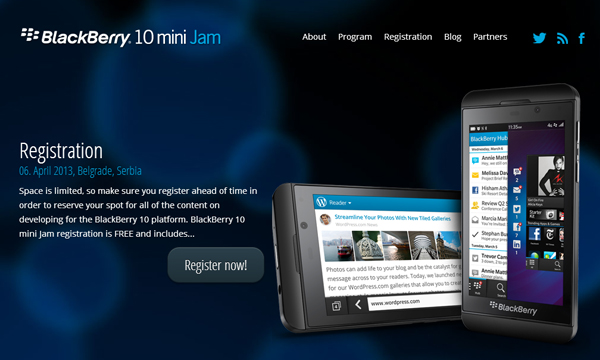 The second Blackberry mini Jam 10, which is also the largest BlackBerry event in the Balkans, will take place on April the 6th in Serbia’s capitol Belgrade, in Hotel Zira. The goal of this event is to bring together developers from the Balkans and beyond, in order for them to get familiar with the new operating system and the opportunities it offers.

This event is being organized by BlackBerry Developer Group Balkan and the Embassy of Canada, ​​with the support of BlackBerry itself. Participants will have an opportunity to see for themselves the benefits of the new OS throughout different hands-on presentations. All of this will be possible thanks to the new BlackBerry Z10 smartphone, which will be presented to domestic audience for the first time.

Blackberry 10 mini Jam also strives to connect developers from different communities and thus lead them to new opportunities through the process of sharing knowledge and information. The event aims to maximize use of region’s potentional as Balkans is swarming with new and creative developers at this moment.

BlackBerry Developer Group Balkan is bringing experts directly from BlackBerry which will share their knowledge and experiences with developers and participants. They will also be able to learn what it takes to develop applications for the new OS and how just how easy it is to port different applications from other platforms.

In a statement he gave to Netocratic, Branko Nikolic, mini Jam organizer and manager of BlackBerry Developer Group Balkan, stated some of the things participants can expect from this event:

Beside that, we have BlackBerry experts, VIP guests, partners and investors at Jam Space and a lot of prizes for developers in Prize Lottery.

It is important to note that the registration for the Blackberry 10 mini Jam is free and includes admission to all lectures. All you need to do is register at the official website, but bare in mind that the venue can accommodate only up to 500 participants, so you’re better off booking your seat right now.

Netocratic will be reporting from the event as an official media sponsor. Readers can expect exclusive interviews with the Blackberry officials, as well as more detailed information considering the date and carries which will have new BlackBerry smartphones.